there’s this boy; his name means ambitious and auspicious and someone who soars.

he is beautiful, and hard working, and he definitely does soar.
but the biggest thing about him is that
his heart is filled with so much love,
his capacity for it amazes me.

so of course, this boy meets a girl, and many things happen
and all the things that happen, if you really get a chance to see them,
leave you with the feeling like
ah. so this is what they meant by “love”.

(and oh, so this can happen outside of a movie script?)

so what i want to do is…
– i want to write their story.

but i don’t know how to write something based on true events
without saying too much, or fabricating too much.

it seems like it’ll be a story with all feelings, no plot.
all telling, no showing.

just a pure, simple story
of my observations of other people’s stories?

is that something i can write?

you know what looks really magical to me?

something that looks as though it is straight out of a fairytale?

these little white fuzzy things that look like dandelion fluff flying around in the air! when they’re all gathered, and just blissfully floating in the breeze. it looks so dreamlike ❤ i feel like they are tiny fairies, or lost wishes, or pieces of old memories, or other precious things you could capture and keep in jars (but that are much more beautiful when set free~) i feel like i should chase them or something. and they’ll lead me to a place. a place where wishes come true* haha.

whatever they may be, aren’t they just magical? ❤

the image of them all floating in the air brings up pretty, magical pictures like these in my head, so:

can’t get this guy out of my mind.
my heart is so full of love for him right now.
i absolutely love this guy. zack fair – a true hero.
forever in my heart; he is one of my most favourite male characters ever.
(way up there in the top five. top two.)

he better be there, all well and alive, in kh3. -fingers crossed-
(if aerith is all fine and chilling with squall and others, and yuna/rikku/paine are some kind of pixies, then zack can still be alive. it’s kingdom hearts. anything can happen).

also.
you know what’s really important?
getting closure.
spending as much time with your loved ones as you can, while you can.
and telling them everyday how much they mean to you. not just telling them, showing them.

if you’re in gongaga, go visit your parents!
if you’re in nibelheim, go have dinner with your mom!
if you’re leaving for a mission, tell your girl that you love her and hug her and kiss her like it’s the last time you get to see her (because it just might be and omg i’m crying this stupid game.)

also.
i learned that
i love zack. i love zerith. and i hate this stinky game.

Kingdom Hearts Re:Coded
The gameplay of this is awesome! 😀 Like, every single world is different. And there are so many many different aspects to it, cheat tuners, quests, missions, floor challenges, the random but fun/cute avatar menu?? It’s like a wonderland of KH fun! 😀 I usually play games focussing more on the storyline; as in, story first, gameplay second, so, sometimes, I’ll speed through certain things, to progress the plot, but this game actually makes me feel like playing it 100% despite the lacking plotline in this one ^-^ (or near 100% xD seriously, there are so many trophies to unlock; it would take me forever to get them all. i’ll just aim for the 20 needed to get the secret ending :P)

The game is less relationship-based than I was expecting. Well, at least so far… I was looking forward to some Cloud x Zack bromance, and some Zack x Aerith love~ But apparently, a year or something have passed of Zack x Aerith being together and I didn’t get to see how their relationship progressed into being a legit couple! D: No real complaints though, because omg, they’re still so adorable. When Zack went to see Aerith after the Anjiru-sadscene and was crying, and she hugged him, awh. ❤ So touching ;o; Love this couple. They are so so good together. toobadtheybothdielol (+It’s annoying though sometimes, we’ll be all hyped up for tonight, expecting some Zeris scenes, and then Tseng or someone calls Zack away right as he’s about to enter the church. And then again, next night, “oh yes, finally some Zeris”, but, he gets called away on stinky SOLDIER/Genesis duties again! DX)

So fun seeing Cloud like this, oh my god. xD He laughed. LAUGHED. Yes, laughed. All nice and casual-like, and non-emo. Oh my, love &lt3.

And, also, watching this right now. We’re on season 1 – episode 10 or something around there. And omgoodness, the art style is SO cute. The characters look ADORABLE. Kirito is like, perfect. And him and Asuna look really really cute together. 😀 Can’t wait to see more of them~ Also, the storyline seems really interesting so far 🙂 And Kirito is cute. :B And I love how it is related to video games ‘cause you know. Games are love. So. 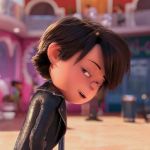 Went to watch Despicable Me 2 today with the family! 😀
LOVED IT.
Love the cute family moments. Like the part in the second-last picture, when Gru dressed up as a Fairy Princess and Agnes went and told him that she knew it was him, awwwwwhhh -broughttearstomyeyesseriouslyXD- that little girl is so adorable. And Edith is awesome with her ninja outfit and perpetual hat. 😀

And of course, the minions, minions, minions. XD An awesome, awesome bunch. I love how they all have names, and distinct personalities and whatnot. XD Different hairstyles, and eye colours and everything. 😛 Love it. I tried to try and tell some of them apart LOL. xD Caught some of the names… Kevin, Jerry, Stuart, Dave, Lance. xD Kevin’s kind of mean. 😛 And the ice-cream part … what was it … “kelato”? Haha, love their minion language. xD Must look up their VA(s?) xD. 😛

And the Grucy love was cute, (andnotforced,likeitsometimescanbeinnon-romancegenrefamilymovies). The ending was perfect. :3

Just one thing.
I couldn’t find Carl D:
I kept hearing about how Carl was the VA’s favourite minion, so I was looking for him while (re)watching [ +showing it to mom and two younger sisters who hadn’t watched it yet O: ] the first movie a couple days ago. couldn’t find him. thought he might be more present in the second. couldn’t find him. D: >3>” idkwhy.

on a related note to my last post, i love this anime’s OST. some of the instrumentals they use are so beautiful ❤

just finished the Zero no Tsukaima series yesterday, and O.M.G.
this is what i endured all the stinky stuff in this anime for. oh my god. beautiful, beautiful, stuff. just. love.

how cuteee are they?? ihadtoremindmyselftokeepbreathingwhenthishappened.looveeee~~~

The artwork is beautiful (love all the flowers and birds!), the quotes are lovely and inspiring, and it is so fitting in my carpe-diem themed room (and life). Seriously, my favourite calendar ever. 🙂